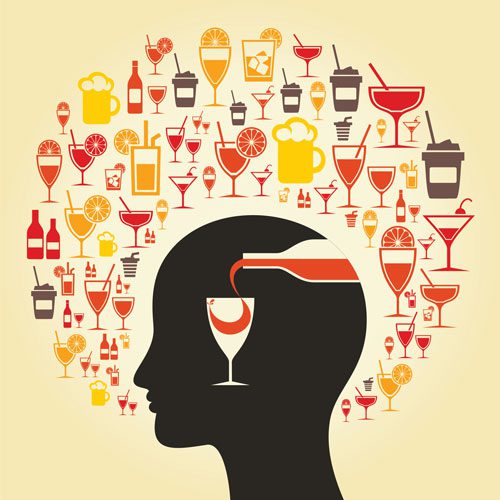 Have you ever wondered why it is that one person acts goofy after drinking alcohol while another person gets sentimental?

According to research, many factors contribute to how an alcoholic buzz manifests in a particular individual.

How Alcohol Affects the Brain

Alcohol is immediately absorbed by the cell walls and then enters the bloodstream where it is dissolved by the water in the blood. The bloodstream carries the alcohol where its effects begin to be observed. Within 20 minutes, a person’s Blood Alcohol Concentration (BAC) can rise significantly. The BAC rises when the body absorbs alcohol faster than it can eliminate it.

According to scientific research, alcohol’s effect changes as the BAC rises.

6 Key Aspects of the Drunk Identity

Within the general effects of alcohol, other factors contribute to how a person psychologically responds and acts while under the influence. This is known as the drunk identity, an identity that emerges while drinking. The quickness and range of mood has been shown to be affected by your sober personality, age, mental state, sex, genes, and environment. Each of these factors can create a dangerous vortex when it comes to emotional and impulse control.

Getting drunk usually exaggerates a person’s personality, both the one friends and family are aware of and the one that is kept subdued, exposing what a person may otherwise keep hidden when sober.

“Like any drug, alcohol affects your behavior, but it doesn’t introduce behaviors that aren’t already present,” says Joshua Gowin, Ph.D., of the National Institute on Alcohol Abuse and Alcoholism.

In other words, alcohol peels away layers of the self to reveal a person’s vulnerabilities, attitudes, and raw emotions. If a person becomes mean or more affectionate while drunk, those responses are exaggerated responses of already existing traits. Alcohol, though, hinders a person’s ability to pull back, and thus, the social veneer is stripped away.

Because alcohol affects the brain, age directly influences how a person acts under the influence. A young person cannot cope with alcohol the same way as an adult. The brain is still developing during the teenage years, as well as gaining an understanding of who you are.

Whatever mood a person is in at the time of consumption will most likely be amplified. For instance, if a person drinks after losing a loved one, the intensity of sadness will increase. You can see the potential danger that comes when drinking while upset. Drinking while angry can create a maelstrom of emotions. According to research conducted by Yale University, stress, like alcohol, messes with the part of the brain that controls decision making and managing emotions. So, drinking on a stressed brain magnifies this inability—a dangerous mix.

According to the NIAAA, biological differences in men and women affect the way alcohol is metabolized. Because men often have more muscle than women, and muscle holds more water than fat, women will feel the effects of a given dose of alcohol quicker and stronger than men of similar size and weight. This is because the water in muscle dilutes alcohol.

If you’re the type who can’t resist having that third drink, or begin to slur your words after the second, your genes are most likely to blame. Research has found that traits like staggering, poor coordination, and slurred speech are all linked to a specific stretch of your DNA.

Researchers have also identified an “alcoholism gene” that makes some people more prone to alcoholism. Oddly, it has also been found that people with the alcoholism gene are able to drink a lot of alcohol without feeling intoxicated.

The people and place where one drinks also has an effect on how a person responds to alcohol intoxication. If you are in a place where an ex-boyfriend shows up or another stressful trigger is present, the response is going to mimic the stress and become amplified.