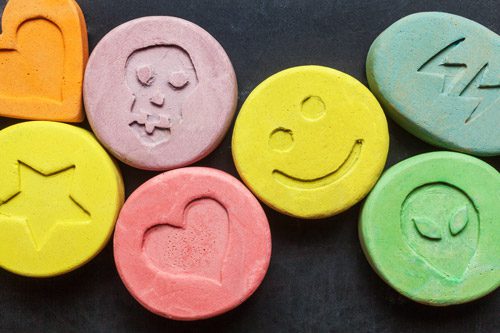 Ecstasy is the street name for a version of 3,4 methylenedioxymethamphetamine (MDMA)—a powerful psychoactive drug with both hallucinogenic and stimulant properties. Often used at raves and concerts, it’s frequently referred to with cute nicknames like “beans” and “Skittles.” This obscures the fact that ecstasy use can have lasting consequences for a person’s health and well-being.

Ecstasy Is Similar to Methamphetamine

Ecstasy tablets may look like candy, but appearances can be deceiving. The bright colors and imprints of cartoon characters can’t hide that this club drug is a derivative of amphetamine and structurally similar to methamphetamine.

Like methamphetamine, ecstasy can cause heart failure, kidney failure, and seizures. Paranoia, depression, confusion, and aggression can also be long-term side effects of both ecstasy and methamphetamine use. Mephedrone, a newer designer drug commonly referred to as bath salts, has similar effects as well.

Much of the Supply in the United States Is Contaminated

When you buy any illegal street drug, it’s impossible to know its potency or purity. This is especially true when you’re buying ecstasy. Dealers often cut MDMA with other substances to increase their profit margins or to provide users with a more intense high. Common contaminants in ecstasy include aspirin, caffeine, and cough medicine, as well as other drugs like heroin, cocaine, LSD, and fentanyl. In some cases, law enforcement officials have seized drugs being sold as ecstasy and discovered the tablets contain no MDMA at all.

Contaminated drugs increase the risk of an allergic reaction or poisoning. If the ecstasy is contaminated with another illegal drug, this also increases the risk of an overdose—especially if the person is at a club and drinking alcohol as well.

Ecstasy Can Be a Gateway Drug

The gateway hypothesis states that certain drugs increase a person’s risk of experimenting with other addictive substances. Under this definition, ecstasy is a gateway drug because it often leads to the use of cocaine and methamphetamine. Individuals using ecstasy at raves or nightclubs may also be exposed to additional club drugs such as GHB, Rohypnol, and ketamine.

The more addictive substances a person uses on a regular basis, the more challenging it becomes to treat their substance use disorder. The safest course of action is to seek treatment as soon as it becomes apparent that an individual is struggling with addiction.

To some extent, all addictive substances cause changes in a person’s mood and behavior. However, ecstasy is particularly well-known for reducing inhibitions. This can lead people to act out in risky and impulsive ways. Increased sexual activity—often with multiple partners and without attention to safer sex practices—is common. Sexually transmitted diseases, unplanned pregnancy, or sexual assault can result.

Additionally, ecstasy decreases a person’s ability to feel pain. If a person becomes injured when using ecstasy, they may not realize they are in need of medical attention. This could lead to disability or even death.

Ecstasy Use May Lead to Permanent Brain Damage

Is one night of partying worth the possibility of brain damage? Growing evidence shows that even casual ecstasy use can lead to permanent brain damage. For example, a study conducted on monkeys showed that exposure to ecstasy for just four days caused brain damage that could be seen up to seven years later. The damage affected serotonin-containing neurons, which can lead to lasting mood changes as well as difficulty with attention, memory, and cognitive function.

Another study conducted on long-term users of ecstasy in their 20s found MRI evidence of hippocampal atrophy. The hippocampal volume of the ecstasy users was 10.5% smaller and the overall proportion of gray matter was 4.6% lower than what was found in the control group. This is a strong indication of progressive cognitive impairment and is most often found in older adults suffering from Alzheimer’s disease or dementia.

Addiction isn’t a character defect, and a relapse doesn’t mean that a person is doomed to struggle forever. Substance use disorders are considered chronic illnesses that require treatment designed to fit individual needs. If a person has relapsed, this is simply an indication that some element of their previous treatment plan was not effective.

At Mountain Laurel Recovery Center, we believe recovery is possible for all those who desire it. We work with clients to help them develop the tools for a lasting recovery, beginning with detox and intensive individual, group, and family therapy at our Pennsylvania drug and alcohol addiction treatment facility. Following graduation from residential treatment, clients can utilize our extended care services to provide the support and accountability they need to continue moving forward in their recovery journey.

Looking for a drug rehab in Pennsylvania? If you or a loved one are in need of help from addiction, please contact us today.