Senior Citizens and Addiction: Recovery is Always an Option 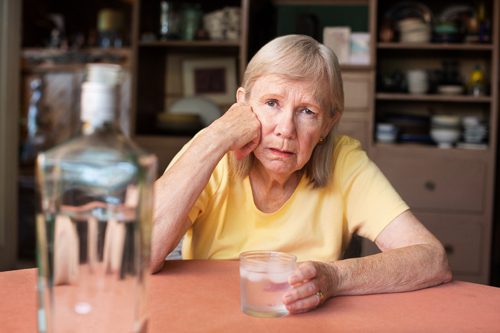 In lamenting to a friend recently about frustrations with our parents, he said something like, “They’re old, though. They are who they are at this point; we have to give them a break.”

I agree with him, to an extent. We can work to love our parents unconditionally, accepting that they are on the path they’ve chosen and allowing them the space to be as they are. But I also believe that it’s never too late to grow and learn. I guess the catch is that you have to want to grow and learn; if you want something, age is no longer a factor.

So what do we do when our parent or grandparent starts to show signs of problem drinking? Do we shrug it off? Do we say “Whatever makes them happy”? My grandmother enjoyed an occasional glass of wine with dinner or a sip of Southern Comfort in the afternoon, but as she grew older, the glass of wine turned into a bottle, and the sip into several shots or more. My mother was concerned: “When I call her in the morning, she’s fine; but if I talk to her in the afternoon, I can tell she’s been drinking; she doesn’t make any sense, she cries a lot, she repeats herself several times in the same conversation, she doesn’t always know who I am.” Under the influence of alcohol, my grandmother displayed signs of dementia: personality changes, memory loss, extreme mood swings, delusional thinking. When she was diagnosed with dementia, and then Alzheimer’s, we wondered if her quick decline could have been forestalled if she had stopped drinking.

Drinking to Cope with Pain

Research shows that almost 3 million Americans over age 55 suffer from alcohol abuse; by 2020, that number is expected to jump to 6 million. While some seniors have abused alcohol their whole lives, others don’t start drinking heavily until late in life. These late-onset drinkers often start drinking to ease the loneliness, anxiety, depression, or the physical pain that can accompany aging.

My grandmother began drinking more heavily after leaving the home she’d lived in for 40+ years to buy a new house with a new husband, neither of which she seemed to like all that much; in addition to depression and anxiety medication, her doctor prescribed medications to ease her chronic back pain. If my grandmother had used therapy instead of alcohol to cope, would she have been healthier and happier?

Research supports this possibility. Older adults do not tolerate alcohol as well as they might have when they were younger. According to an article in The Journal of the NIAAA, “Because drinking comparable amounts of alcohol produces higher and longer-lasting blood alcohol levels in older adults than in younger people, many problems common among older people, such as chronic illness and poor nutrition may be exacerbated by even small amounts of alcohol.” The article goes on to note that older adults who drink heavily are also at greater risk for cognitive changes, harmful drug interactions, injury, depression, memory problems, liver disease, sleep problems, cancer, and diabetes.

Alcohol’s Effect on the Aging Brain

It’s tempting to blame my grandmother’s doctor for not noticing her problems with alcohol or factoring it into his diagnosis. But studies show that health care practitioners often misdiagnose or fail to detect alcoholism in seniors for several reasons: 1) they don’t associate addiction with the elderly and are therefore less suspicious of alcohol misuse; 2) they see alcohol misuse as “understandable” given the difficult life situations of their patients and don’t see the point in pushing the issue; 3) signs of alcohol misuse in the elderly, like falling, confusion, or depression, are not recognized as alcohol-related; 4) alcoholism is often confused with mental illness or predementia (O’Connell, et al., 2003).

In addition, we can remember that the symptoms of drinking are different for seniors than for younger people. Elderly people who drink too much are subject to the following symptoms:

The difficulty, of course, is that many of these signs are also signs of aging; however, if your elderly loved one displays these symptoms and also drinks alone, has increased their alcohol consumption, smells like alcohol, and gets defensive when questioned about drinking, it’s time to consider intervention.

So is treatment for problem drinking worth the time and effort for older adults? According to an article in the New York Times, “…older people can indeed benefit from treatment or intervention. In fact, older people dependent on alcohol do better in treatment than younger people.” The article explains that seniors are more likely than younger people to attend therapy and take prescriptions, and they’re less likely to relapse. Seniors who don’t drink as heavily but still have some level of dependence respond well to “brief alcohol interventions—focused 15- to 20-minute counseling sessions that can lead to better decisions about drinking.”

Approaching your loved one about their drinking can be tricky. As the above article suggests, a good way to start might be to ask, “Have you talked to your doctor about the medications you’re on and how they might interact with alcohol?” Also, the doctor interviewed in the article suggests calling your loved one’s doctor to discuss your concerns. While doctors can’t share patient information with you, they are able to receive information from you.

Whether your aging loved one has been dependent on alcohol for years or has just recently begun to drink heavily, there is always time for change. Even if they live only a year or two in recovery, those years will be priceless to them and to their families. Stopping drinking can slow dementia, prevent falls and accidents, and improve overall health. Counseling can help seniors make peace with who they are even as they strive to repair relationships and engage in meaningful activity in their later years.

Treatment centers like Mountain Laurel Recovery Center can answer your questions and help older clients determine what level of treatment is right for them. Mountain Laurel welcomes clients of all ages and believes that recovery improves life quality at any stage of life.

If you would like to find out more about Mountain Laurel Recovery Center’s treatment program, please contact today.