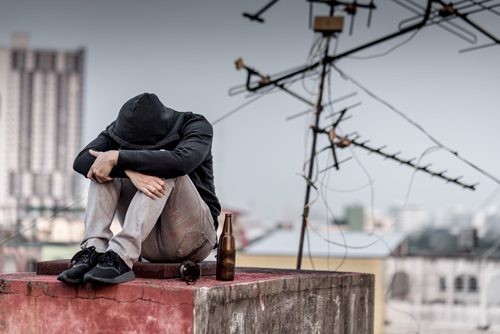 It is not uncommon to struggle with feelings of depression while in recovery from substance abuse, but at what point do those feelings necessitate professional help?

How can you tell that your loved one is suicidal?

According to the National Institute of Mental Health, suicide is the tenth leading cause of death in the United States. Suicide took the lives of 44,965 people in 2016, which was double the amount of people killed by homicides. The study also showed that people between the ages of 18 and 25 have the highest rate of serious suicidal thoughts and tendencies.

This means the number of American adults at risk for suicide is much greater than the annual average fatalities. One of the top factors contributing to a person becoming suicidal is major depression. The rate of depression is two to four times higher in people suffering from substance abuse.

According to a 2014 article in Psychology Today, one in three people who die from suicide are under the influence of substances. The most commonly used substances associated with suicide attempts are oxycodone, heroin, and alcohol. These are all depressants and act to lower inhibitions, which could hypothetically push someone who has thought about suicide to actually do it.

“Although the suicide rate among patients with untreated substance use disorders is reportedly as high as 45 percent, only 11 percent of addicts get treatment,” the article states. So, in considering how substance abuse affects the risk of suicide, we should also think about how the stigma of addiction hinders many people from feeling comfortable reaching out for help. With no end in sight, many people may view suicide as a logical response.

Even 24 years after Kurt Cobain’s death in 1994, there is still a debate among fans on whether or not his death was a suicide or an accidental overdose. Because of the nature of overdose, it’s often near impossible to determine if a death was intentional or unintentional. Coroners can only review the evidence at the scene and make an educated guess.

According to a 2017 article published by the National Institute on Drug Abuse, unintentional overdoses are cases in which:

Overdoses are categorized and interpreted by the World Health Organization as “the disease or injury which initiated the train of events leading directly to death, or the circumstances of the accident or violence which produced the fatal injury.”

Cases of intentional overdose is associated with evidence of desire to self-harm.

While completing residential treatment is a huge achievement, people in the throes of transitioning from a substance abuse recovery center back into the real world often experience intense feelings of depression.

Even with months of clean time, a moment of tragedy or despair could lead to relapse and send someone spiraling back into the belief that their only destiny is death or a life of terminal substance abuse. While in a treatment center, residents have continuous support. Without that safety net, feelings of depression can easily slip into suicidality, or the ideation of suicide.

Of all the substances that put a person at risk for suicide attempts, methamphetamine users are at the top. People who inject meth are 80 percent more likely to attempt suicide than people who inject all other types of drugs, reports a study published in the US National Library of Medicine.

This study pointed at a critical need for suicide prevention to be a primary aspect of recovery from substance abuse, especially in cases of meth users.

Whether our loved ones are currently in the throes of substance abuse or newly sober, it is no surprise that we constantly worry about their safety. Suicide prevention takes a multi-faceted and complex approach, which is best handled under the guidance of professionals.

Common signs of suicide as defined by the Suicide Awareness Voices of Education (SAVE) are:

If you feel your loved one is in immediate danger, you should call 911 or an emergency service. If you suspect your loved one is abusing drugs or alcohol and at risk of self-harm, it is best to create a plan of intervention in order to initiate a path out of the darkness.